On the morning of Aug. 22, Dave and I woke up at 6:30 a.m. in order to have enough time to catch the 9:00 a.m. ferry outside of Yakutsk that would plant us back on the New Summer Road heading east to Magadan.

Yakutsk is situated to the west of the main haul road and across the Lena River. We needed a ferry to get there and now we were returning.

While drifting back to the New Summer Road from Yakutsk over the Lena River, Dave and I leaned against the railings on the boat and watched in disgust as two men beside us, who’d both climbed out of an SUV crammed full of women and children, shared a bottle of vodka between them. One of them was the driver.

I was feeling edgy and scowled at the men, who wanted to talk to us about our bikes. Dave asked them to go back to their car.

This was the first full riding day after my crash five days earlier and we’d been warned the road to Magadan—still almost 2,000 km (1,240 mi) away and 99 percent gravel—was sketchy. I was really starting to loath my rear tire, which I believed didn’t have a proper traction pattern down its middle to grip loose road surfaces.

Days ago, back in Tynda, I’d told Dave my thoughts about the rear tire, a Shinko, after having ridden a few thousand kilomteres with it to that point with Brian. He and I had to do a mud section, where I was slipping all over the place and I would have swapped it out in a second, given the chance, but in eastern Russia, there aren’t many options for motorcycle tires.

The tire was one of the reasons I had thought seriously about riding from Tynda to Vladivostok rather than to Magadan but Dave suggested if it came down to it, he’d swap his rear tire, a beefy, dirt-happy Motoz, with mine. Dave is a more confident rider than I and knows how to throw his bike around in the loose stuff so as to gain traction. I’m still learning this concept and often find myself drifting or fishtailing when I’d rather not be.

Throughout our two-year trip we have gone through 26 tires and not once have I loathed a tire as much as my rear Shinko. In fact, I’ve barely noticed a difference between most of the dirt tires we’ve had, whereas Dave has often noticed little nuances and differences between all of them.

The potential of swapping rear tires made me feel more comfortable with continuing on to Magadan but I should have trusted my gut and pushed for Dave to swap the tires then and there as a few days later, I crashed and believe the rear tire’s lack of traction played a large part in that.

Now we were on the ferry getting back to ‘er after a few days off. I asked Dave if we could swap rear tires as he’d suggested several days ago. He said he’d do it later when we’d stopped for the night.

The ferry docked and we rode off, stirring up 100-metre long dust clouds behind us for the next 380 km (236 mi) until we reached a second ferry crossing. The road had been okay to this point but I was off my game and couldn’t bring myself to average more than 60 kmph (35 mph) in the loose gravel. It was frustrating and, even after 90,000 km (55,900 mi), it felt like I’d been demoted back to my first days of learning to ride gravel.

The second ferry took 1.5 hours and when we got off on the other side, it was dark. I’d long since stopped using my helmet’s visor as it was terribly scratched from thousands of miles of use. Dave and I used sunglasses or visors during the day to protect our eyes but in the dark, we had nothing covering our eyes and were constantly getting pelted by dust and bugs.

We waited for some time after all the cars had disembarked the ferry and had gone ahead to let their dust settle. Then I waited for 5 mins after Dave went ahead, navigating us into the next town, about 50 km (30 mi) away, where we would spend the night.

Despite watering eyeballs, it was peaceful riding slowly along the gravel road in the dark. That was until a vehicle would gain on me and I’d have to move over to the shoulder to let them pass, getting shot by loose gravel bits and inhaling lung-fulls of dust.

Finally, we reached town around 9:30 p.m. and set about finding a place to sleep, tired and hacking up balls of dust-filled phlegm. We found a hotel but just as we were swinging our legs off our saddles, two SUVs came racing into the lot and a handful of Brits hurried up the hotel’s steps in front of Dave, who followed them inside. They must have known something we didn’t.

While I stayed with the bikes, men came and went out the hotel doors, standing under a bare light bulb, where they smoked and spat on to the ground staring at me.

Dave eventually came out, looking pissed. There were no rooms. The Brits had taken all the remaining beds.

We rode off in a huff to try and find another place. No one knew of another hotel in town, although we did find a sign for a hotel that pointed us down a dark, vacant road. There was a building at the end that didn’t look like a hotel at all but there was a woman at the front door. We asked her about a hotel. She motioned for us to come inside. Dave went with her while I stayed with the bikes. He was in there a long time. When he finally emerged, he told me the woman had been calling around for us and that we were to wait here a little longer for a guy to show up, who had an apartment we could rent for the night. When he drove up, we followed him to one of Russia’s infamous, sketchy looking apartment housing complexes, where we parked in an alley we never would have left the bikes in at the beginning of our trip, and followed him up six flights of stairs with all our luggage. He opened the door to the apartment and we both breathed a sigh of relief. It was very basic and expensive for Russia—about $60 USD ($76 CAD) per night—but it was much-needed and the hour was now past 11:00 p.m. The fact that this man had answered a call at that time of night to house some foreigners was heartwarming. The Russians just kept proving their good-hearted nature again and again.

The next morning, Aug. 23, after Dave swapped our rear tires, we rode towards Kyubeme, a small vacant-looking village 30 km (18 mi) or so west of where the Old Summer Road (OSR) connects to the Road of Bones (ROB). Keep in mind, we’re riding the New Summer Road (NSR), a far better haul road leading into Magadan, Russia’s eastern-most road-accessible city. Before the NSR was built, in 2008, the OSR was the only way to Magadan, and was heinous. Since the new road was built, the old road has been left unmaintained. There is still a 420 km (260 mi) section where the ROB continues to entice off-road adventurers.

This was another part of the entire trip Dave was very much looking forward to and was hoping to do with the Latvians, but in Yakutsk, we’d learned from them that wasn’t in the cards. They had flights leaving from Magadan in 3 days and wouldn’t have time. 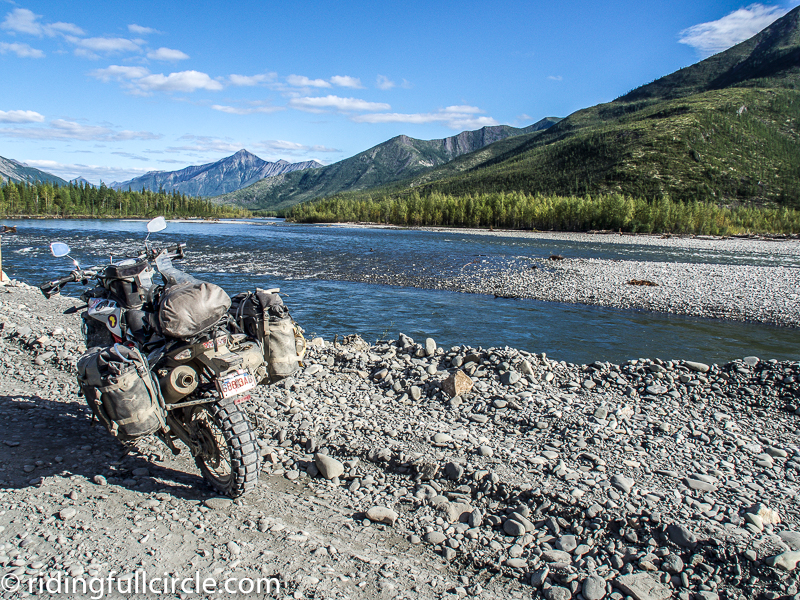 So far, the NSR had been scenic and uneventful, which was fine with me. It helped me get my confidence back after my crash but one of the scariest moments for me on the entire trip wasn’t the crash, in fact, but during a time I was trying to pass an 18-wheeler haul-truck on the NSR. The dust was badly billowing out his back end and I couldn’t manage to pass as I never seemed to have a good sightline into the on-coming lane. This game of edging forward to get close enough to pass but then dropping back realizing I couldn’t see a thing, continued for well over 10 minutes.

It had been an extremely dry summer and the dust was so fine it was like driving into baby powder. Anything moving at speed would stir up a dust cloud that swirled in every direction and hovered for ages before clearing.

Passing a semi, and one that was going at a good clip, say over 80 kmph (50 mph), could be pretty nerve-wracking as the dust cloud would be so high and wide, it was impossible to see anything on-coming or in front of you.

Dave found a moment where the road curved around a long, right corner and the wind was in his favour, blowing the dust left. He made a quick decision to pass the truck on its right after making eye-contact with the driver and honking. Many vehicles in Russia, including this truck, are right-side drive.

I could hear Dave on the intercom but it was cutting in and out. I couldn’t make out if he was saying the on-coming lane was clear or to wait until the on-coming vehicle cleared. Obviously, unsure if the pass would be safe, I hung back waiting for another opportunity, which I finally got. Here is a video to show how scary passing trucks on dusty roads can be.

Shortly after I almost smoked into the back of the semi after it stopped still encased in its cloak of dust, I heard Dave trying to connect with me on the Sena. I thought he might be asking if I’d passed the truck yet but the thing wouldn’t connect. Seconds later, I felt my heart race into my throat again for the second time in so many minutes when a huge wolf-like dog jumped out of the bushes to my right and started racing toward me. I grabbed a fistful of throttle and passed it by only a few feet. I’m never sure if these dogs that chase bikes have the intention to actually attack you or if they are just playing. Either way, you don’t want to hit a dog while riding a motorcycle.

At some point that evening, when we were settled into our tent beside a river, I remember joking, but not really, that I might have post-traumatic stress disorder after this trip.

Next post: as we get closer to Magadan, we have a more scenic, epic ride.

Subscribe to Riding Full Circle: head to our home page, look to the left menu…SUBSCRIBE! Be sure to follow through with the confirmation e-mail that will be sent your way, which you’ll likely find in your spam folder.

Wanna join us for a leg? Contact us for any part of the trip you’d like to ride along with us or to suggest a place we should ride.

Where are we right now?

Find us at Riding Full Circle